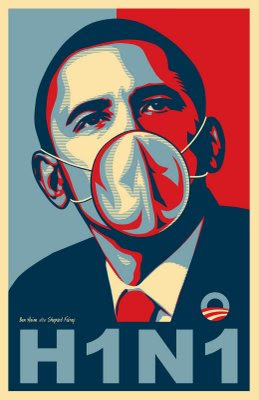 Hélio Schwartsman me enviou este REPORT TO THE PRESIDENT ON U.S. PREPARATIONS FOR 2009-H1N1 INFLUENZA, que disponibilizo aqui. Acho que seria interessante que jornalistas e blogueiros dessem uma olhada.
A MODEL SCENARIO: A POSSIBILITY, NOT A PREDICTION (página 16).
One plausible scenario is that there will be resurgence in transmission of 2009-H1N1 this fall that is comparable to that seen in spring-summer 2009 but with higher rates of transmission due to the resumption of school and the cooler, drier weather. Following a relatively steady or declining burden of cases in August, the number of new cases will begin to rise exponentially in the first week of September, growing 10-fold about every 10 to12 days.
Hypothetically, the peak incidence of infection nationally will occur around October 15, with minor variations across the country such that peak incidence almost everywhere will occur during the month of October. At this peak, perhaps 1 to 2 percent of the population will become infected each day.
Predicting demand on the health care system during this peak is fraught with uncertainties, but the following numbers from one possible scenario are illustrative. During the peak, 1 or 2 out of every 2,000 Americans might be hospitalized.
Cases requiring mechanical ventilation or intensive care could reach 10 to 25 per 100,000 population, requiring 50 to 100 percent or more of the total ICU capacity available in the United States and placing great stress on a system that normally operates at 80 percent of capacity. Because adult ICUs are not prepared to care for pediatric patients, there could be a particular shortage of facilities for sick children.
In particular locations, the stress on the health care system could grow even more acute, as large outbreaks occur in prisons, schools, and isolated communities with limited health care access, such as Native American reservations. As awareness of the pandemic spreads, pressure on emergency departments could mount, with long lines and a need for triage of mild cases and non-influenza cases.
Alongside these health-related burdens, substantial absenteeism from work and school could occur, as sick children stay home, schools with large outbreaks close, and parents are forced to stay home either because of their own illness or to take care of sick children. Key members of the social infrastructure, such as police officers and firefighters, are increasingly home ill. Exposure of healthcare workers to sick patients is continual and antiviral supplies prove inadequate for ongoing prophylaxis of these workers. Retail pharmacies run out of antiviral supplies in late September or earlier, and states face the demand to replenish these supplies from state stockpiles and state Strategic National Stockpile allocations; however, many states lack the ability to move antiviral drugs into the retail supply chain and focus on delivery to hospitals.
Hospitals face competing pressures to dispense antiviral drugs for prophylaxis of their workers, to provide them to patients appearing in the emergency room, or to save them for the sickest admitted patients. Debates intensify about the value of antiviral use for long-term prophylaxis or early treatment for mild infection in high-risk groups such as pregnant women and immunocompromised patients, treatment of severely ill patients, and prophylaxis of essential healthcare workers.
In this model scenario, around October 15, as the epidemic peaks, a major supply of 2009-H1N1 influenza vaccine becomes available. Immunization starts within days, with considerable geographical variation in the rate at which administration occurs. Immunization of priority groups is completed by early or mid-November, resulting in immunity in vaccinated adults by mid-late November, as the epidemic wanes in most populations. Children require two doses and do not acquire immunity until December, when new infections will have become rare.
By the end of 2009, 60 to 120 million Americans would have experienced symptomatic infection with 2009-H1N1; nearly 1 to 2 million would have been hospitalized, with about 150,000-300,000 cared for in ICUs; and somewhere between 30,000 and 90,000 people would have died, the majority of them under 50 years of age.
We emphasize that this is a plausible scenario, not a prediction. By way of comparison, it is less severe by a factor of three (in terms of expected deaths per capita) than the “reasonable worst case” planning assumptions, publicized by the UK government, for the H1N1 resurgence in that country.
Notes:
1 The United States has 20 ICU beds/100,000 population. The number of ICU beds available for pediatric patients is especially limited.
2 The United States has 211 hospital beds/100,000 population.
excitable media journalism swine flu