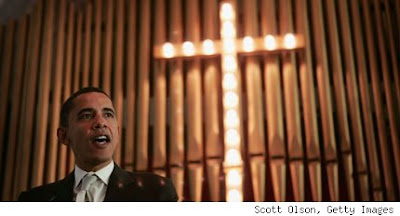 Ateus não vão votar mais em Obama?
Non-Believers Losing Faith in Obama: More God Talk Than Bush -- and Same Old Faith-Based Policies
(...)
Sonia Sotomayor was not seen as quite the champion of church-state separation that secularists would like, but her nomination was followed by Obama's twin-bill nominations in July of Dr. Regina Benjamin, a practicing Roman Catholic who was awarded a papal medal, as surgeon general, and Francis S. Collins, an outspoken Evangelical and leading gene scientist, as director of the National Institutes of Health. Collins was an atheist but converted in his 20s, and in 2006 he wrote a best-selling book, "The Language of God: A Scientist Presents Evidence for Belief."
That was a red flag to secularists (Collins' support for stem cell research and evolution also drew opposition from some conservative Christians – strange bedfellows, indeed), who voiced concern about the nation's most prominent scientist also being a believing Christian. (In fact,a recent Pew survey shows that about half of scientists report a religious affiliation and just over half say they believe in God or a "higher power." That's not like the numbers of the wider public, but not inconsiderable either.)
The most public critique came from Sam Harris, a prominent voice in the neo-atheist vanguard of best-selling authors and polemicists, whose July 26 op-ed in The New York Times said that "few things make thinking like a scientist more difficult than religion."
"Must we really entrust the future of biomedical research in the United States to a man who sincerely believes that a scientific understanding of human nature is impossible?" Harris asked. The atheist blogger at Examiner.com, Paul Fidalgo, called Collins' nomination "one more public embrace of irrationality" by Obama.
How much this represents an incipient revolt among the unbelievers is hard to say.
Marina Silva politics science and religion