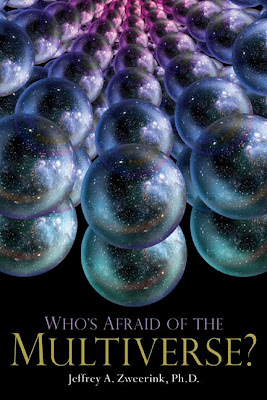 A theory that claims that it might be possible to make universes in the laboratory may not be as far-fetched as it sounds, says Marcus Chown

The ultimate experiment is about to begin. On a cold, lonely moon, shrouded in purple-pink fog, a sentient ocean marshals the energy of a galaxy and focuses it on to a tiny mote of matter. A hundred billion stars flicker and dim. The air above the ocean sizzles and catches fire. Crushed by stupendous energies, the mote twists and bucks and, with a violent shudder, implodes. Elsewhere – in another space, another time – a searing-hot fireball explodes out of nothingness and begins to expand and cool. The ultimate scientific experiment has produced the ultimate experimental result: the birth of a new universe.

Could our universe have been born in such a way? According to Edward Harrison, it's a real possibility. "Our universe could easily be the outcome of an experiment carried out by a superior intelligence in another universe," says Harrison, a British physicist, formerly of the University of Massachusetts at Amherst.

Why suggest such an outlandish thing? Because it sheds light on a deep puzzle: why the laws of physics appear "fine tuned" for our existence. Even slight deviations in the laws would result in a universe devoid of stars and life. If, for instance, the force of gravity were just a few per cent weaker it could not squeeze and heat the matter inside stars to the millions of degrees necessary to trigger sunlight-generating nuclear reactions. If gravity were only a few per cent stronger, however, it would heat up stars, causing them to consume their fuel faster. They would not exist for the billions of years needed for evolution to produce intelligence.

This kind of fine tuning is widespread. One possible explanation is that the universe was "designed" by God. Some scientists accept this, but "unfortunately, it terminates further scientific enquiry", says Harrison. The other possibility is that the universe is the way it is because, if it were not, we would not be here to notice. According to this topsy-turvy reasoning known as the "anthropic principle", it is unsurprising that we find ourselves in a universe that is fine tuned for the existence of galaxies, stars and life. We could hardly have evolved in a universe that was not.

The anthropic principle leads to the idea that our universe is one of countless others. In each universe of this "multiverse", forces like gravity have different strengths. An unavoidable consequence, however, is that most universes lack the special conditions needed for the birth of galaxies, stars, planets and so on. "There will be countless lifeless universes," says Harrison. "This is waste on a truly cosmic scale."

But in cosmology, as in politics, there may be a third way. According to Harrison, the multiverse could be far from a wasteland. It could be dominated by universes with galaxies and stars and life. The prerequisite is that life-bearing universes have a special ability: the ability to reproduce. Specifically, Harrison is suggesting that intelligent life actually makes new universes. "If so, then in offspring universes which are fit for life, new life evolves to a high level of intelligence, then creates further universes," says Harrison.

In Harrison's scheme, dubbed the "natural selection of universes", the laws of physics most suited for the emergence and evolution of life are naturally selected by life itself. The origin of our universe is explained. It was created by super-intelligent beings living in another universe.

If Harrison is right, the fine tuning of the laws of physics has two possible explanations. New universes could inherit the characteristics of their cosmic parents, as children inherit the characteristics of their parents. Small "genetic variations" in the laws between generations would ensure that new universes were not carbon copies of their predecessors. It follows that since the parent of our universe was fine tuned for life and similar to our own – if it were not, life would never have arisen in it to make our universe – our universe must also be fine tuned. Another possible explanation for the fine tuning is that the makers of our universe actually engineered our universe to have laws that promoted the evolution of intelligent life.

According to Harrison, the mystery of why the universe appears designed for life has a straightforward solution: at a fundamental level it was designed for life. However, and this is Harrison's novel twist, it was designed not by God – a Supreme Being – but by superior beings. Angels, if you like. "Intelligent life takes over universe-making business," says Harrison. "Consequently, the creation of the universe drops out of the religious sphere and becomes amenable to science."

Crucial to Harrison's reasoning is the assumption that it is possible to make a universe. Bizarre as it seems, this is not science fiction. The recipe was discovered independently around 1980 by Alexei Starobinsky in what was then the Soviet Union and Alan Guth in America. In their "inflationary" picture, our Universe "inflated" from a super-dense "seed" of matter, perhaps only a thousandth of a gram. This prompted Guth to suggest that a universe might be made in the laboratory. Simply take a seed of matter and squeeze it to the extraordinary density that once triggered the inflation of our universe. This will make a black hole. According to Guth, the super-dense interior will inflate – not in our universe, but in a bubble-like space-time connected to our own by the "umbilical cord" of the hole. This cord is unstable. When it snaps, a baby universe will be born. "The practical details are not important," says Harrison. "The important thing is that if beings of our limited intelligence can dream up wild, yet seemingly plausible, schemes for making universes, beings of much higher intelligence might know theoretically and technically how to do it."

Recreating the conditions of the first split-second of the universe is way beyond our capabilities. But it may not be impossible. "It's conceivable that more intelligent beings – perhaps even our own descendants in the far future – might possess not only the knowledge, but also the technology to build universes," says Harrison.

But why would they want to? Perhaps, says Harrison, simply to see what happens. There may be beings so advanced that their children make universes in the same way human children make figures out of plasticine. Another possibility, says Harrison, is that an advanced civilisation, out of a spirit of altruism, might make new universes that are ever more hospitable for life.

Einstein famously said: "The most incomprehensible thing about the universe is that it is comprehensible." According to Harrison, the explanation is that it was created by comprehensible beings – beings far in advance of us but basically like ourselves. Intelligent, but also intelligible. They made our universe to be like theirs, and their universe was in turn understandable. After all, they had to have the understanding to manipulate it and make a new universe.

A difficulty with Harrison's vision is that if our universe was created by superior beings in another universe, and theirs in turn was created by superior beings in an earlier universe and so on, who or what created the first universe? One possibility, admits Harrison, is God. But he distinguishes between his idea and the religious view. "In my scheme, God starts things," he says. "Thereafter, superior beings take over the creation of further universes." Another possibility is that in the beginning there was a large ensemble of universes, each with its own random variant of the laws of physics. Most of the universes were dead and uninteresting. But, by chance, the conditions in at least one – the intelligent "mother universe" – were right for life. "Thereafter, intelligent universes come to dominate the ensemble, since they alone reproduce," says Harrison.

One thing follows automatically from Harrison's vision. If humanity avoids destruction and survives into the far future, one day our descendants will have to make an important decision: whether or not to become parents.