A CONVERSATION WITH JEREMY NIVEN 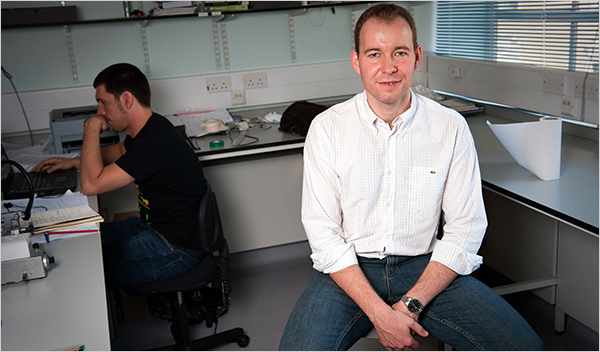 Dr. Jeremy Niven in his lab at the zoology department at Cambridge University.

Get Science News From The New York Times »

Q. YOUR RESEARCH SUBJECTS ARE LOCUSTS. SOME PEOPLE MIGHT SAY, “LOCUSTS, YUCK!” WHY STUDY THEM?

A. I think locusts are sweet. When you get used to them, they are actually quite nice.

Actually, I find that working with invertebrates opens your mind. Insects don’t perceive the world the way we do. Trying to understand them makes you think more about why we see the world as we do. Many animals have different sensors and receive different energies. Birds have ultraviolet vision. So do bees. They can see things we don’t. One learns respect for their capacities.

But the other thing is that insects in general and locusts in particular are admirable because they permit us to gain new information about nervous systems. With insects, we can actually study neural circuits and see how what happens in the neurons relates to behavior.

Q. SO INSECTS ARE YOUR MODEL ANIMAL?

A. Yes. You see, with mammals, their nervous systems are very complex and everything you look at is more difficult to connect to behaviors. There are so many neurons in their brains — where do you even begin? How do you associate what’s going on in the neuron with what’s going on in the animal? Now, in insects, there are fewer neurons and so they can be identified more easily.

Of course, insect brains don’t work in the exactly same way a human brain does. But there is more overlap than many realize. It’s a consequence of evolution that animals have used the same biological tricks to get what they need from the environment. They mix and match different molecular components to build the system they need. So you can find the same components in a locust’s nervous system as in human. We just have more of it.

Q. YOU’VE DONE AN EXPERIMENT WHERE YOU PLACED LOCUSTS ON A LADDER THAT HAD JIGGLING RUNGS. YOU THEN WATCHED HOW THEY WORKED THEIR WAY ACROSS THIS TRICK LADDER. WHAT WAS THE POINT?

A. I wanted to know how locusts used their vision to coordinate their limbs in a changing situation. This research involved learning how insects combine visual information with decision making and motor patterns.

With locusts, we’ve long thought they used their limbs to feel things gradually or that they used their antennae to sense the environment, much like a blind person with a cane. But with our experiment, we showed they use their vision to make a kind of guesstimate of distance. Then they jump.

Many insects use an approximate approach. So they teach us that many behaviors that a psychologist might describe as very complicated, an insect can do with very few neurons, and by making a few rough guesses.

Q. WHY SPEND TIME LEARNING THIS?

A. We have not discovered yet the neural circuits in humans that are involved in reaching for objects. However, we might be able to work that out in locusts. We already know that it doesn’t take a huge brain to accurately control the limbs. These insects do it. There are all kinds of possibilities for robotics and for rehabilitative medicine in these studies.

Q. OVER YOUR CAREER, WHAT WOULD YOU SAY HAS BEEN YOUR MOST SIGNIFICANT FINDING?

A. In 2007, we were able to study how much energy neurons used and we quantified it. We studied different types of insect eyes — from tiny fruit fly eyes to huge blowfly eyes. In each creature, we worked out how much energy it takes for neurons in the brain to process information. What we learned was that the more information a fly’s eye needed to process, the more energy each unit of information consumed. That means that it’s bad, in the evolutionary sense, for an animal to have a bigger brain than it needs for survival. It’s like having a gas-eating Ferrari, when what you really need is Honda Civic.

Q. SO BIG BRAINS ARE NOT ALWAYS AN ADVANTAGE?

A. Bigger is better if you want to produce enormously complicated behavior. But in evolution, brains evolve by selection. There always is pressure on animals to produce behaviors for as little energy as possible. And that means for many animals, smaller brains are better because they won’t waste energy.

You know, there’s this pervasive idea in biology that I think is wrong. It goes: we humans are at the pinnacle of the evolutionary tree, and as you get up that tree, brain size must get bigger. But a fly is just as evolved as a human. It’s just evolved to a different niche.

In fact, in evolution there’s no drive towards bigger brains. It’s perfectly possible that under the right circumstances, you could get animals evolving small brains. Indeed, on some islands, where there’s reduced flora and fauna, you’ll see smaller versions of mainland species. I would argue that their brain size has been reduced because it saves energy, which permits them to survive in situations of scarcity. They also might not need big brains because they don’t have natural predators on the islands—and don’t have to be as smart because there’s nothing to avoid.

Q. SPEAKING OF ISLANDS, WHEN AN APELIKE FOSSIL WAS DISCOVERED ON THE INDONESIAN ISLAND OF FLORES IN 2003, A GREAT CONTROVERSY BROKE OUT AMONG ANTHROPOLOGISTS. SOME SAID THIS THREE-FOOT TALL SMALL- BRAINED CREATURE WAS A NEW SPECIES OF HOMINID — A HUMANLIKE PRIMATE. OTHERS CLAIMED IT WAS AN EARLY HUMAN WITH A BRAIN DEFORMITY. WHY DID YOU JUMP INTO THE FRAY?

A. Because I thought it was a hominid. This thing about its being a human ancestor with a diseased brain never made much sense. The people who insisted it was a deformed early human couldn’t believe that it was possible to have such a huge reduction in brain size in any hominid. Yet, it’s possible to get a reduction in brain size of island animals as long as the selection pressure is there. There’s nothing to stop this from happening, even among hominids.

Q. SO WHY WERE OTHER SCIENTISTS INSISTING THAT FLORES MAN WAS A DEFORMED HUMAN?

A. Because there’s this idea that nature moves inexorably towards bigger brains and some people find it very difficult to imagine why if you evolved a big brain — as ancient hominids had — why you would ever go back to a smaller one. But evolution doesn’t really care. This smaller brain could have helped this species survive better than an energy-consuming bigger one. The insects have shown us this.

Q. GETTING BACK TO INSECTS. DO YOU UNDERSTAND WHY PEOPLE DISLIKE THEM SO?

A. I think probably because in the near past, we associated insects with disease. That’s a big part of it. On the other hand, Darwin loved insects. There’s a wonderful quote from him, where he’s talking about the marvelous brains of ants, and he says that they may be more marvelous than the brains of humans or monkeys because they are tiny and to be able to do so much behavior with such tiny brains, I can’t help but agree.