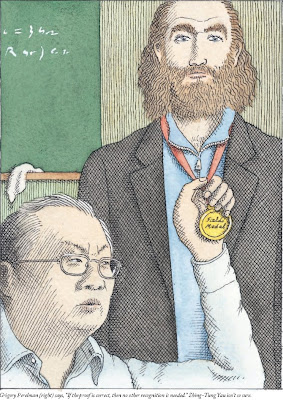 The reclusive Russian mathematician Grigory Perelman, aka Grisha, gained worldwide fame by claiming to have solved one of the world’s most intractable mathematical problems, the Poincaré conjecture, and then disappearing in St. Petersburg. On Thursday he said he had rejected a $1 million prize from the Clay Mathematics Institute in Cambridge, Mass., for the feat.

“I have refused,” Interfax, a Russian news agency, quoted him as saying. “You know, I had quite a lot of reasons both for and against. That is why I took so long to make up my mind.”

James Carlson, president of the Clay institute, said he had spoken with Dr. Perelman by phone. “He was, as usual, quite pleasant, though quite firm in his decision,” Dr. Carlson said.

The problem, named after the great French polymath Henri Poincaré, has led mathematicians on a frustrating chase for a century. It hypothesizes that any three-dimensional space without holes is essentially a sphere.

In 2003, Dr. Perelman posted a series of papers on the Internet claiming to have proved the conjecture, and a deeper problem by the Cornell mathematician William Thurston, building on work by Richard Hamilton, a Columbia University mathematician.

After a brief barnstorming tour in the United States, during which he refused interviews, Dr. Perelman returned to Russia, leaving the world’s mathematicians to pick up the pieces and decide whether he had really done it.

A worldwide race to retrace, explicate and check Dr. Perelman’s proof ensued. In the meantime, Dr. Perelman quit his post at the Steklov Mathematical Institute, moved in with his mother and ceased communicating with the outside world.

By 2006, as learned papers totaling more than a thousand pages of dense mathematics slouched toward publication, it was becoming apparent that Dr. Perelman had indeed solved the conjecture, and he was awarded a Fields Medal, the most prestigious award in mathematics, at the International Congress of Mathematicians in Madrid.

Dr. Perelman, who already had a history of declining awards, did not show.

So when the Clay institute announced in March that he had won the big prize, many doubted that he would accept. In June, a three-day symposium in Paris celebrating the proof of the conjecture went on without him.

Dr. Perelman said Dr. Hamilton deserved as much credit as he did, Interfax reported. “To put it short,” he said, “the main reason is my disagreement with the organized mathematical community. I don’t like their decisions; I consider them unjust.”

The Clay institute said it would announce this fall how it would spend the award money.