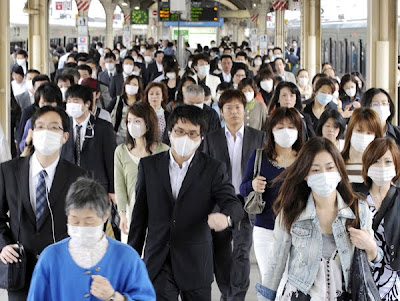 the physics arXiv blog
How Media Reports Influence Pandemics
Posted: 01 Jul 2010 09:10 PM PDT
Up-to-data media reports about the way an infectious disease is spreading could dramatically reduce the severity of an outbreak, according to a new mathematical model
The widespread fear that various pandemics are set to devastate the human race has led to another kind of outbreak: a rash of models predicting how various diseases will spread through society.
These models are valuable. They allow governments to estimate how badly their society will be influenced and to make emergency plans accordingly. They also allow authorities to test the efficacy of various strategies for controlling an outbreak, such as restricting travel and closing down social meeting places like restaurants and schools.
Now Anna Mummert at Marshall University and Howard Weiss at Georgia Tech examine the effectiveness of another tool: the media. They point out that announcements in the media have a powerful effect on the behaviour of individuals. During the 2003 SARS outbreak, for example, the US Centre for Disease Control and Prevention recommended that travel to SARS infected areas should be restricted. The announcement was widely reported in the media and the number of travellers to these areas dropped dramatically.
At the same time, a rumour spread through New York city that a restaurant worker in Chinatown had died from the disease, a rumour that was also covered by various media outlets. The rumour turned out to be false but that didn't stop the numbers of visitors to Chinatown also dropping dramatically.
Mummert and Weiss argue that these kinds of media reports cause people to "self-isolate": to not travel, to wear face masks and reduce their exposure to crowds. And that can have a significant effect on the progress of a disease.
To test their hypothesis, they simulated the effect of an outbreak of Ebola fever in the West Virginia town of Huntington which has a population of 50,000. They used a standard model which counts the number of susceptible and infected individuals and the number of "removed" individuals, those that either die or recover and become immune, and models the rate at which people jump from one pool to another.
They also add one additional assumption to this model: that the number of individuals who self-isolate increases with the number of infections reported by the media.
So the idea is that public health agencies constantly update the media about the number of infections, which then immediately pass on the information to the general population.
When that happens, the result is a dramatic decrease in the severity of the outbreak. And the more up-to-date the information, the greater this effect.
The reason for the decrease in severity is that self isolation effectively makes people immune because they cannot get the disease. Mathematically, they get transferred from the "susceptible" to the "removed" pool, without passing through the infected stage.
The researchers compared this to the situation in which the news is held back, or delayed by a few crucial hours or days. In this case the decrease in severity is not nearly so dramatic
"We conclude that the best policy for limiting infectious disease outbreaks is to get the news out loud and quickly," says Mummert and Weiss.
That's certainly a worthy conclusion, not least because the public deserves to know what's going on.
But the role of self isolation needs to be studied in much greater depth before its true value can be gauged. For a start, the assumption that a self isolated individual is no longer susceptible may not be strictly true. That individual can still become infected later, when necessity requires a trip to the supermarket, for example.
Neither do Mummert and Weiss gauge the effect of rumours that turn out to be untrue. If these cause people to become unnecessarily self isolated, then that could have important consequences. One of these might be that people are less likely to self isolate the next time they hear a rumour, whether true or not. In that case, media reports of rumours that turn out to be untrue could make future outbreaks more severe.
Interesting stuff but clearly, there's more work to be done.
Ref: arxiv.org/abs/1006.5028: Get the News Out Loudly and Quickly: Modeling The Influence of the Media on Limiting Infectious Disease Outbreaks
journalism swine flu