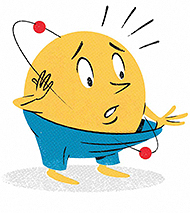 Not so for the proton, the subatomic particle that anchors atoms and is the building block of all ordinary matter, of stars, planets and people. Physicists announced last week that a new experiment had shown that the proton is about 4 percent smaller than they thought.

Instead of celebration, however, the result has caused consternation. Such a big discrepancy, say the physicists, led by Randolf Pohl of the Max Planck Institute for Quantum Optics in Garching, Germany, could mean that the most accurate theory in the history of physics, quantum electrodynamics, which describes how light and matter interact, is in trouble.

“What you have is a result that actually shocked us,” said Paul Rabinowitz, a chemist from Princeton University, who was a member of Dr. Pohl’s team.

The results were published in Nature. Protons, of course, have not shrunk. They have been whatever size they are ever since they congealed out of a primordial soup of energy and even smaller particles — quarks and gluons — in the early moments of the Big Bang. Determining how big they are, however, is both important to fundamental physics and extremely difficult.

Unable to calculate a radius directly from theory, physicists have measured protons in different ways. One is by scattering electrons off them. Another more accurate way is by spectroscopic measurements of the wavelength of the light emitted as electrons in the atom jump from one orbit to another and using quantum theory to compute the proton’s properties.

Putting these techniques together gave an answer of about 0.8768 femtometer for the proton’s radius, just less than a quadrillionth of a meter. By comparison, a typical atom is about 100 trillionths of a meter.

Seeking more precision, Dr. Pohl and his colleagues created atoms in which the electron had been replaced by a muon, which is a sort of fat electron. Weighing about 200 times more than an electron, the muon circles its proton more closely and thus gives a better reading of the proton size. The surprise was an answer that was 4 percent smaller, 0.84184 femtometer.

When that new radius, which is 10 times more precise than previous values, was used to calculate the Rydberg constant, a venerable parameter in atomic theory, the answer was 4 percent away from the traditionally assumed value. This means there are now two contradicting values of the Rydberg constant, Dr. Pohl explained, which means there is either something wrong with the theory, quantum electrodynamics, or the experiment.

“They are completely stunned by this,” said Dr. Pohl of his colleagues. “They are working like mad. If there is a problem with quantum electrodynamics this will be an important step forward.”

The late Caltech physicist Richard Feynman called quantum electodynamics “the jewel of physics,” and it has served as a template for other theories.

One possibility is that there is something physics doesn’t know yet about muons that throws off the calculations.

Or perhaps something we just don’t know about physics. In which case, Jeff Flowers of the National Physical Laboratory in Teddington in Britain pointed out in a commentary in Nature, a new phenomenon has been discovered not by the newest $10 billion collider but by a much older trick in the book, spectroscopy.

“So, if this experimental result holds up, it is an open door for a theorist to come up with the next theoretical leap and claim their Nobel Prize,” Dr. Flowers wrote.