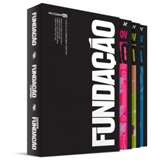 É uma estranha coincidência que o livro de Charles Galton Darwin (The Next Million Years) tenha surgido quase simultaneamente com o clássico Fundação de Isaac asimov. Será que houve influência mútua?
Update: Parece que Darwin leu Asimov, pois os contos foram publicados a partir de 1942:
Foundation was originally a series of eight short stories published in Astounding Magazine between May 1942 and January 1950. According to Asimov, the premise was based on ideas set forth in Edward Gibbon's History of the Decline and Fall of the Roman Empire, and was invented spontaneously on his way to meet with editor John W. Campbell, with whom he developed the concept.[2]
Original trilogy
The first four stories were collected, along with a new story taking place before the others, in a single volume published by Gnome Press in 1951 as Foundation. The remainder of the stories were published in pairs as Foundation and Empire (1952) and Second Foundation (1953), resulting in the "Foundation Trilogy", as the series was known for decades.[3]
Later sequels
In 1981, after the series had long been considered one of the most important works of modern science fiction,[1] Asimov was persuaded by his publishers to write a fourth book, which became Foundation's Edge (1982).[4]
Two years later, Asimov followed up with yet another sequel, Foundation and Earth (1983), and five years later, the prequels Prelude to Foundation and Forward the Foundation. During the lapse between writing the sequels and prequels, Asimov tied in his Foundation series with his various other series, creating a single unified universe of his best-known works.
Psychohistory (fictional)
From Wikipedia, the free encyclopedia
For the study of the psychological motivation of historical and current events, see psychohistory.
Psychohistory, a fictional science in Isaac Asimov's Foundation universe, combines history, sociology, and mathematical statistics to make (nearly) exact predictions of the collective actions of very large groups of people, such as the Galactic Empire.
Contents
1 Axioms
2 The Prime Radiant
3 Development
4 Limitations
5 Asimov on psychohistory
6 Asimovian psychohistory and similar concepts in other fiction
7 Beyond fiction
8 In role-playing games
9 Literary influences
10 See also
11 Notes and references
12 External links

Axioms
Psychohistory depends on the idea that, while one cannot foresee the actions of a particular individual, the laws of statistics as applied to large groups of people could predict the general flow of future events. Asimov used the analogy of a gas: an observer has great difficulty in predicting the motion of a single molecule in a gas, but can predict the mass action of the gas to a high level of accuracy. (Physicists know this as the Kinetic theory.) Asimov applied this concept to the population of his fictional Galactic Empire, which numbered a quintillion. The character responsible for the science's creation, Hari Seldon, established two axioms:

There is a third underlying axiom of Psychohistory, which is trivial and thus not stated by Seldon in his Plan: