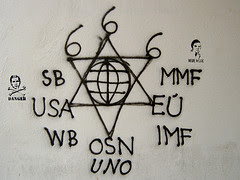 Bible conspiracy theories posit that much of what is known about the Bible, in particular the New Testament, is a deception. These theories variously claim that Jesus really had a wife, Mary Magdalene, and children, that a group such as the Priory of Sion has secret information about the bloodline of Jesus, that Jesus did not die on the cross and that the carbon dating of the Shroud of Turin was part of a conspiracy by the Vatican to suppress this knowledge, that there was a secret movement to censor books that truly belonged in the Bible, or the Christ myth theory, proposed for example in Zeitgeist, the Movie as a means of social control by the Roman Empire. This is portrayed in the book The Da Vinci Code.

The Two Babylons was an anti-Catholic religious pamphlet produced initially by the Scottish theologian and Presbyterian Alexander Hislop in 1853 then published as a book in 1919. Its central theme is its allegation that the Catholic Church is a veiled continuation of the pagan religion of Babylon, the veiled paganism being the product of a millennia old conspiracy.[64][65] It has been recognized by scholars as discredited and has been called a "tribute to historical inaccuracy and know-nothing religious bigotry" with "shoddy scholarship, blatant dishonesty" and a "nonsensical thesis".[66][67]

Although scholarship has shown the picture presented by Hislop to be absurd and based on an exceedingly poor understanding of historical Babylon and its religion, his book remains popular among some fundamentalist Christians.[64] Mormons before the reign of Pope John XXIII routinely referred to the Roman Catholic Church as the "Church of the Devil"; after Pope John XXIII, they discontinued support for this conspiracy theory.

Although extensively footnoted, giving the impression of reliability, commentators (in particular Ralph Woodrow) have stated that there are numerous misconceptions, fabrications and grave factual errors in the document, and that this book follows the line of thought of works like: Martin Luther - On the Babylonian Captivity of the Church (1520), Titus Oates - An Exact Discovery of the Mystery of Iniquity as it is now in Practice amongst the Jesuits (1679), Conyers Middleton - Letter from Rome (1729).[70]

Among some Jewish religious and extreme right groups is circulating the assertion that the Menorah (goldencandelabrum) - which was in 70 C.E. pillaged by Titus's soldiers from the Jewish Temple in Jerusalem - still exists and is secretly kept by the Catholic Church in the cellars of the Vatican.

This rumor surfaces again and again. Most recently, during the visit of Pope Benedict XVI to Israel in May 2009, a small group of extreme right militants demonstrated against the Pope with signs reading "Thief, give back our Menorah!". Two followers of the late Rabbi Meir Kahane - Itamar Ben Gvir and Baruch Marzel – at the time actually tried to get a judicial injunction to prevent the Pope from leaving the country "pending the return of the stolen Jewish treasures" [2]. The judges refused to grant any such injunction, as the appellants could bring no concrete evidence of the Menorah truly being in the Vatican.

Historians in general assume that the Menorah - like many other treasures stored in Ancient Rome - had been looted by the Vandals during the Sack of Rome in 455 CE. There is no shred of historical evidence of its having ever been in the hands of the Catholic Church. Nevertheless, the above theory persists in certain Jewish circles, as a focus for anti-Catholic (and generally anti-Christian) agitation.

Further information: Christ myth theory and Jesus Christ and comparative mythology
The existence of Jesus as an actual historical figure has been questioned by few biblical scholars and historians, some of the earliest being Constantin-François Volney and Charles François Dupuis in the 18th century and Bruno Bauer in the 19th century. Each of these proposed that the Jesus character was a fusion of earlier mythologies.[102]
The views of scholars who entirely rejected Jesus' historicity were summarized in Will Durant's Caesar and Christ, published in 1944. Their rejections were based on a suggested lack of eyewitnesses, a lack of direct archaeological evidence, the failure of ancient works to mention Jesus, and similarities early Christianity shares with then-contemporary religion and mythology.[103]
More recently, arguments for non-historicity have been discussed by George Albert Wells, Earl Doherty (The Jesus Puzzle, 1999), Timothy Freke and Peter Gandy (The Jesus Mysteries) and Robert M. Price.
The religious scholarly mainstream not only rejects the myth thesis,[104] but identifies serious methodological deficiencies in the approach.[105] For this reason, many scholars consider engaging proponents of the myth theory a waste of time,[106] comparing it to a professional astronomer having to debate whether the moon is made of cheese.[107] As such, the New Testament scholar James Dunn describes the mythical Jesus theory as a "thoroughly dead thesis".[108]
11:22 AM, junho 29, 2010