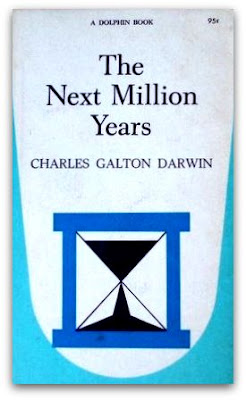 OverviewIn short, Darwin argued that humans were molecules, that assemblies of humans constituted "conservative dynamical systems", and that one could use statistical thermodynamics, particularly American mathematical physicist Willard Gibbs version of it, to predict the course of the next million years of human evolution. In his book, according to a 1953 review by Time magazine, Darwin, a theoretical physicist, invades sociological territory where many sociologists fear to tread. [2] He bases his reasoning about man's future on what is sometimes called "social physics": the idea that the behavior of humans in very large numbers can be predicted by the statistical methods that physicists use with large numbers of molecules. Accordingly, in the gas phase, the motions of single molecules are unpredictable: they may move fast or slow and zigzag in any direction, but the impacts of billions of gas molecules against a restraining surface produce a steady push that obeys definite and rather simple laws. In the same manner, Darwin believes, the actions of individual humans are erratic and sometimes remarkable, but the behavior of large numbers of them over long periods of time is as predictable as the pressure of gas. All that is needed is to determine the basic, averaged-out properties of human "molecules."

In Darwin's view, according to the review, "human molecules have one fundamental property that dominates all others: they tend to increase their numbers up to the absolute limit of their food supply". [2]