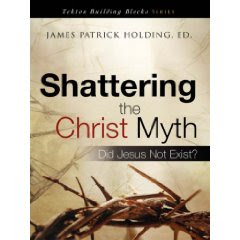 Of course you want to see my review of the book, hopefully will appear on Amazon.com in a few days:

Having been aware of this so-called "debate" on the Internet (please note: it is entirely an "online debate" not one advanced by serious NT or historical Jesus scholars) since the mid 1990s, I am glad that J.P. Holding has finally transcribed and edited some of his impressive "Tektonics" online articles for an entire book on "Shattering the Christ Myth." He and his amateur scholar contributors have pulled together an excellent set of articles and chapters debunking both the "myth" hypothesis and the "copycat" or "pagan parallel" thesis presented by many an anti-Christian conspiracy buff and uninformed skeptic of historical Christianity.

Chapters include an introduction on the history and origin of the "Christ myth" claims dating from the early 1800s; detailed defenses of the standard non-biblical references to Jesus from the Jewish historian Josephus (his two passages), the Roman historian Tacitus, Lucian, Pliny the Younger, and Papias; responses to the various "silences" argued by "mythicists" from Remsburg to G.A. Wells to Earl Doherty; analysis of the supposed "pagan Christs" from Mithra to Krishna to Horus to Dionysos; reviews and refutations exposing the abysmal scholarship and poor arguments of recent "Christ myth" movies "The God Who Wasn't There" and "Zeitgeist"; and additional material on the city of Nazareth, the academic and Internet mythicists, and more.

This book shows there is really nothing at all to the "mythicist" claims: they are groundless historically, poorly argued based on "silence" and refuted by numerous reliable witnesses to Jesus, and that includes the canonical Gospels and the earliest writings of St. Paul. The real debate among scholars is not whether there was a historical Jesus who was crucified under Pontius Pilate around 30 AD, but on Christ's claims to divinity and being the unique Son of God, the miracles of the Gospels as signs of that divinity, and especially the bodily resurrection of Jesus Christ -- i.e. the whole "Jesus of history" vs. "Christ of faith" debate among conservative evangelical and more "liberal" scholarship.

Jeffery Jay Lowder of Internet Infidels: "There is simply nothing intrinsically improbable about a historical Jesus; the New Testament alone (or at least portions of it) are reliable enough to provide evidence of a historical Jesus. On this point, it is important to note that even G.A. Wells, who until recently was the champion of the christ-myth hypothesis, now accepts the historicity of Jesus on the basis of 'Q'." ("Josh McDowell's 'Evidence' for Jesus")

British historian Michael Grant: "...if we apply to the New Testament, as we should, the same sort of criteria as we should apply to other ancient writings containing historical material, we can no more reject Jesus' existence than we can reject the existence of a mass of pagan personages whose reality as historical figures is never questioned...To sum up, modern critical methods fail to support the Christ-myth theory. It has 'again and again been answered and annihilated by first-rank scholars'. In recent years 'no serious scholar has ventured to postulate the non-historicity of Jesus' -- or at any rate very few, and they have not succeeded in disposing of the much stronger, indeed very abundant, evidence to the contrary." (Jesus: An Historian's Review of the Gospels[1977], pages 199, 200)

Anglican Bishop N.T. Wright: "It is quite difficult to know where to start, because actually the evidence for Jesus is so massive that, as a historian, I want to say we have got almost as much good evidence for Jesus as for anyone in the ancient world....the evidence fits so well with what we know of the Judaism of the period....that I think there are hardly any historians today, in fact I don't know of any historians today, who doubt the existence of Jesus [aside from one or two]....It is quite clear that in fact Jesus is a very, very well documented character of real history. So I think that question can be put to rest." ("The Self-Revelation of God in Human History" from There Is A God by Antony Flew and Roy Abraham Varghese [2007])

Robert Van Voorst: "Contemporary New Testament scholars have typically viewed their [i.e. Jesus-mythers] arguments as so weak or bizarre that they relegate them to footnotes, or often ignore them completely....The theory of Jesus' nonexistence is now effectively dead as a scholarly question....Biblical scholars and classical historians now regard it as effectively refuted." (Jesus Outside the New Testament [2000], pages 6, 14, 16)

Shattering the Christ Myth is a welcome addition to the many evangelical defenses of Jesus Christ by well-known scholars such as R.T. France (The Evidence for Jesus), Moreland/Wilkins (Jesus Under Fire), and recently Boyd/Eddy (The Jesus Legend: A Case for the Historical Reliability of the Synoptic Jesus Tradition). As a Catholic apologist, I also appreciated the brief chapter on "Leo's Line" explaining the "fable quote" sometimes attributed to Pope Leo X by mythicist skeptics.

My only complaint is the book is slightly "oversized" so it is not the size of your normal paperback and may not fit easily on your bookshelf. Nevertheless a definite 5-star effort from apologist J.P. Holding and company.

OK, I'll try to explain, but I'm no expert on this topic. You should go ahead and get the J.P. Holding book, and write your own fair and detailed review.

In the mid-1990s I became aware of this whole "Jesus myth" thing from some radical skeptic forums I was involved with on Usenet and FidoNet (particularly the old obnoxious "HolySmoke" forum). At the time I was a beginning Internet "Catholic lay apologist" (mainly inspired by Karl Keating and Catholic Answers) trying to sort out the whole Catholic-Protestant "fundamentalist" debate thing (along with a few Greek/Eastern Orthodox Christians too), and occasionally ventured into the skeptic-Christian debate. At that time the 80-year-old essay by M. M. Mangasarian"The Truth about Jesus : Is He a Myth?" (orig 1909) I remember was regularly posted at HolySmoke and elsewhere. That was my introduction to the "Jesus myth" claims, and I found this very strange that someone would actually deny Jesus even existed. Sure atheists believed God didn't exist, I knew that already. But that there was no historical Jesus? I never heard that before.

This was back in 1994-95 for me, before Earl Doherty went online, and slightly before the "Internet Infidels" became a site I believe. Other atheists I found online in various discussion forums recommended books by G.A. Wells who was the only well-known "Jesus myth" scholar. What I didn't know, but later found out, was he was not really a credentialed or professional NT or Jesus scholar, but a teacher of German. Wells had also changed his mind about this time, and now writes in his 2004 book:

"Some recent scholars (such as Freke and Gandy in their 1999 book, and Earl Doherty, whose book was also published in 1999) hold that the earliest Christian writers did not believe Jesus to have come to Earth as a man at all. I have never maintained this view, although it has often been imputed to me by critics who have been anxious to dispose of my arguments without troubling to see wherein they consist." (G.A. Wells, Can We Trust the New Testament [2004], page 4)

Wells is now saying he never really believed the "mythicist" claim. In the 1970s however, Wells had at least two books that many atheists and skeptics interpreted as arguing for the "Jesus myth" position, and these are probably the books that Michael Grant is referring to above in his 1977 book on Jesus, along with the earlier "Jesus myth" scholars (very few of them) dating back to the late 19th, early 20th century.

These are outlined in J.P. Holding's book in the chapter by James Hannam "A Historical Introduction to the Myth that Jesus Never Existed." So yes, the "Jesus myth" position had a very few adherents, beginning explicitly with Bruno Bauer (1809-1882), and later Arthur Drews The Christ Myth (1911), then John M. Robertson (1856-1933) The Historical Jesus (1916) and The Jesus Problem (1917) which argued Jesus was based on some sort of pre-Christian myth, and in the United States by John Remsburg The Christ (1909) that Jesus was a pagan god, and mathematician William B. Smith. However, Hannam writes:

"The generation of Jesus Mythologists represented by Smith and Robertson died out in the 1920s. They had based their work on theories about mythology from the 'history of religions' school but scholarship itself moved on, leaving the Jesus Mythologists high and dry....[but] a few amateurs trudged on....It was not until 1971 that the Jesus Myth burst back into life with the work of a polite and erudite Professor of German...George Albert Wells (1926- )." (J.P. Holding, Shattering, chapter by Hannam, page xiv-xvi)

By the 1920s the earliest "mythicist" claims were answered, annihilated, shattered, and obliterated, and then later in the 1970s when they re-surfaced with G.A. Wells, his bogus claims were again answered, annihilated, shattered and obliterated by such historians as Michael Grant, once again in the 1980s (since Wells was still publishing his books) by the evangelical scholar R.T. France (The Evidence for Jesus), and then in the 1990s when Doherty replaced Wells as the primary "Jesus myth" scholar/historian for the skeptic/atheist community, the J.P. Holding online articles (and now his oversized book) answers, annihilates, shatters, and obliterates their claims all over again in excruciating detailed fashion (in my opinion, read the book for yourself).

Maybe when Doherty admits Jesus existed in a new edition of his book (like Wells did), then Richard Carrier will take over as the new "scholar/historian" for the "Jesus myth" claims and come up with new (or new and improved) arguments from silence for "mythicism." You never know....

It is also true (just as I said) that this whole "debate" is limited to mainly online discussion forums (such as the Infidels.org) and web sites (and a couple of self-published books) and isn't addressed by professionals anymore, and is simply ignored by mainstream biblical scholarship and modern historical Jesus studies. E.G. see the Crossans vs. the Craigs, the Borgs vs. the Wrights, the Jesus Seminar or more "liberal" types vs. the evangelicals, or traditional or moderate Catholic scholars like Raymond Brown or John P. Meier, etc. None of these guys are "mythicists" and they do not even address them or their "arguments." Why? Because there is no real "debate" on the subject, never has been. That is my understanding after carefully studying this subject as an amateur the past 10+ years.