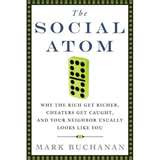 In science, social physics is the study of social systems and social phenomena from the perspective of physics.

The term social physics was first introduced by Belgian statistician Adolphe Quetelet in his 1835 book Essay on Social Physics: Man and the Development of his Faculties, in which he outlines the project of a social physics and describes his concept of the "average man" (l'homme moyen) who is characterized by the mean values of measured variables that follow a normal distribution and collects data about many such variables. [5]

When French social philosopher Auguste Comte, who had also used the term social physics, in his 1842 work, discovered that Quetelet had appropriated the term 'social physics' prior to him, Comte found it necessary to invent the term 'sociologie' (sociology) because he disagreed with Quetelet's collection of statistics.

Comte defined social physics as the study of the laws of society or the science of civilization. [1] Specifically, in part six of series of books, written between 1830 and 1842, on the subject of Positive Philosophy, Comte argued that social physics would complete the scientific description of the world that Galileo, Newton, and others had begun: [4] “Now that the human mind has grasped celestial and terrestrial physics, mechanical and chemical, organic physics, both vegetable and animal, there remains one science, to fill up the series of sciences or observation—social physics. This is what men have now most need of; and this it is the principal aim of the present work to establish.”

In the opening page to his Social Physics, Comte gives the following situation: “The theories of social science are still, even in the minds of the best thinkers, completely implicated with the theologico-metaphysical philosophy (which he says is ‘in a state of imbecility’); and are even supposed to be, by a fatal separation from all other science, condemned to remain so involved forever.” It is interesting, how in the year 2010, the same dogmatic view remains.

In recent years, building on the development of the kinetic theory of gases (1859) and statistical mechanics (1872), founded during the last half of the 19th century, some authors have begun to incorporate a statistical thermodynamic perspective in models of social physics in which people are viewed as atoms or molecules (human molecules) such that the law of large numbers yields social behaviors such as, for instance, the 80-20 rule, wherein, typically, 80 percent of a country's wealth is distributed among 20 percent of the population. [2]

When one applies statistical thought or the "logic of large numbers" to society, according to English chemist and physicist Philip Ball, the concept of human free will is the first question in the minds of those encountering the new "physics of society" for the first time. The debate on this topic, according to Ball, began to rage in the 19th century and still preoccupies sociologists today. [3]