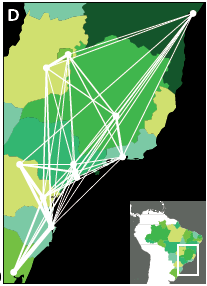 Patterns of Prostitution Captured in Social Network
Posted: 17 Mar 2010 09:10 PM PDT
The patterns of links between buyers and sellers of sex in an online forum differs in important ways from other internet related networks, says a new study. This may have important implications for the spread of sexually transmitted diseases
"Over the past decade, the Internet has become an increasingly important vehicle for sharing information about prostitution," say Luis Rocha at Umea University in Sweden and a couple of buddies. That makes it possible to study the network of links between buyers and sellers at a level of detail that has never been possible before. Today, Rocha and co reveal the results one such study of prostitute-related activity in Brazil.
The community they look at is a public online forum with free registration, financed by advertisements, in which men grade and categorise their sexual encounters with female escorts. The community appears large with over 10,000 buyers and more than 6000 sellers all of whom use anonymous nicknames. The study covers a period of 6 years from when the community was set up in 2002 until 2008.
The study throws up both expected and unexpected results. Among the expected results is the discovery that the geographical connections between buyers and sellers vary as an inverse square law rather than a power law as in many other internet mediated networks. That's not so hard to explain given that buyers or sellers have to travel to each other.
Another discovery is that a high rating for a particular sex worker is a good predictor of high ratings in the future. That's the kind of rich get richer effect that is seen in many internet phenomena (also known as the Matthew effect). However, average or poor ratings don't seem to affect future ratings either way.
Naturally, buyers tend to use more highly rated sex-workers more often. And over short timescales this can be seen in the data. However, look at longer timescales and the effect drops away. That's probably because sex-workers do not stay in their work for long periods of time, say Rocha and co.
Unexpectedly, these behaviours make the network different from traditional scale free networks in some subtle ways.
That could turn out to be significant. Much work has been done on the spread of disease and one important factor is the nature of the network in which infection takes place.
The evidence from Rocha and co is that real world network of links between buyers and sellers in the sex-market is different from traditional scale free networks (although that's something that needs to be checked in more detail).
So the questions that is left begging is this: what effect does this have on the spread of sexually transmitted disease?
Ref: arxiv.org/abs/1003.3089 : Information Dynamics Shape the Sexual Networks of Internet Mediated Prostitution
complex networks women