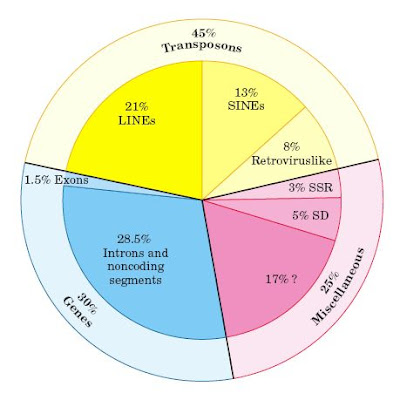 The Rise and Fall of the Human Genome Project
Posted: 16 Mar 2010 09:10 PM PDT
It's not just financial markets that experience bubbles, society does too. And the Human Genome Project is a perfect example, says a new study.
The world has become painfully familiar with the notion of financial bubbles in the last two years. These are periods of in which prices are temporarily raised above their fundamental value, sometimes by orders of magnitude.
But the contention put forward by Monika Gisler and a couple of pals at the Swiss Federal Institute of Technology in Zurich is that it's not just financial markets that experience bubbles. They say there is good evidence for the existence of social bubbles too. They point to the great boom of railway building in Britain in the 1840s, cloning of mammals such as Dolly the sheep, and the craze over Haute Couture, the so-called democratisation of fashion design.
All of these were characterised not by prices rising far above fundamental values, but by human expectations being inflated beyond reason. "These cases were all characterized by extremely high expectations concerning the outcome of the proposed research and/or innovation project," say Gisler and her colleagues.
Today, they show how the Human Genome Project is a particularly good example of a social bubble. They give a fascinating history of the project and the expectations associated with it and focus in particular on how it was funded. This, they say, is an objective way of assessing the enthusiasm for it project, at the time.
The Human Genome Project generated huge expectations that it would revolutionise the treatment of illness and disease and huge commercial opportunities for the development of drugs. The belief that this would dramatically change our society eventually persuaded the US government to spend around $3billion on the project.
It also led to a fierce battle between this government-funded project and a private company called Celera that aimed to complete the task first using cheaper, more powerful sequencing techniques.
This battle led to a kind of virtuous circle which reinforced investors' belief in the potential benefits and caused the scientists themselves to redouble their efforts.
But it also deflected attention from the huge uncertainties about the project. The fear, more or less ignored, was that the benefits would not be as great as imagined.
These fears have more or less come to pass. "Having the complete gene set on the table, the knowledge of the genetic map and sequence is now considered by experts to be only a starting point for future research in biology and medicine," says Gisler and co.
That's not to say it has been of little value. On the contrary, they say. "While there is little to show in terms of progress in medical diagnosis and treatment, in pharmaceutical development, in agriculture, and in other industrial sectors, the HGP catalyzed enormous technological progresses in DNA-based methods."
Gisler's point is that if managed correctly social bubbles can be hugely beneficial, even if they don't produce the desired outcome. But they require a careful hand on the tiller and that's not easy since they require the combined forces of industry, academia and government working towards a common goal.
There are various bubbles in the making today, such as the UK's investment in offshore windfarms in the North Sea, a project that will produce a quarter of the UK's electricity by 2020. This project is huge by any standards: equivalent to building 8 channel tunnels in the next ten years and requires the same kind of link between government, industry and academia to make it work.
There are other efforts that have not yet achieved the kind of terminal velocity necessary for bubble status. One of them is the human genome project''s successor: proteomics, the characterization of the entire array of proteins encoded by our genes, a task that is an order of magnitude more complex than the genome project.
Gisler and co say that the lessons from the Human Genome project could be used to create the same kind of bubble for proteomics. For the moment, however, investors, government and perhaps even the scientists themselves, have yet to achieve critical mass.
Ref: arxiv.org/abs/1003.2882: Exuberant Innovation: The Human Genome Project
biology scientific life