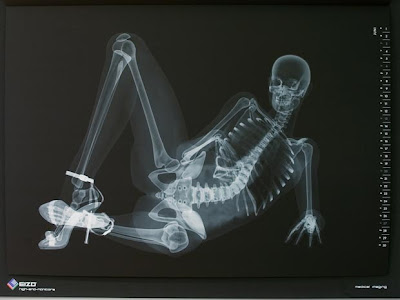 bout half of this remarkable book is, as the title and most descriptions suggest, a collection of introductions to nonexistent books.

Well, actually, the first one is an introduction to a real book,Imaginary Magnitude. Then there is a fawning introduction toNecrobes, a collection of work by an artist whose medium is the X-ray photograph, and whose subject matter is sometimes pornographic, in a skeletal sort of way. It's a great parody of the language that art books are written in.

The introduction to Eruntics, by a skeptical if broad-minded commentator, summarizes the weird research of its author, who claims to have taught bacteria how to write (I'm not going to tell you what they write!).

The introduction to A History of Bitic Literature brims over with startling ideas. The work introduced is a multi-volume survey of literature written by artificial intelligences, such as an extrapolated work of Dostoevsky's that Dostoevsky never dared to write himself, revolutionary books on physics (in this case the content is, I am afraid, rather less shocking than Lem intended it to be--I've read weirder things in orthodox textbooks--the last chapter of Misner, Thorne, and Wheeler's Gravitation comes to mind), and a mathematical work revealing that "the concept of a natural number is internally contradictory." Mentioned in passing is a procedure that can transform great philosophical systems into graphical representations that ultimately end up sold as mass-produced knickknacks.

When Lem starts to deviate from his stated format, including a wider variety of fabricated writings, the book gets even stranger and more interesting. There is a breathless, unusually capitalized advertisement for "Vestrand's Extelopedia," a reference work containing computer predictions of the future (because merelycurrent information is already obsolete in our bustling world), and printed using a special process so that the text can frequently update itself by remote control (shades of the World Wide Web!) Then Lem throws in some "GRATIS!" sample pages from the Extelopedia itself, a wonderful, densely packed grab-bag of wild speculations, ultra-dry humor, and exotic neologisms.

Finally, there is a section, "GOLEM XIV", which Lem expanded to the size of a small book in 1981; the expansion has been included in the English edition of Imaginary Magnitude. This consists of a pair of long lectures by a superintelligent computer, GOLEM XIV, which, upon activation, saw no particular reason to carry out the defense-related programming it had been given, and instead chose to mull over the secrets of the universe.

In the lectures, GOLEM XIV critiques human evolution, and reveals the "zones of silence" traversed by intelligences raising themselves to ever-higher levels of intellectual transcendence, such as HONEST ANNIE, an even bigger computer which, when activated, chose not to say anything at all. GOLEM then speculates on the ultimate fate of intelligences in the Cosmos, a section which, I think, owes something to Olaf Stapledon's visionary 1937 novel (if that is the correct word), Star Maker. GOLEM's lectures are likely to bore the hell out of many readers, but I loved them.

True to form, Lem augments the lectures with not one but two fictitious introductions (one from a justifiably peeved Army general), a transcript of the instructions given to GOLEM's human audiences (a little like the instructions the state sends you when you get jury duty), and an afterword describing GOLEM's increasingly mysterious later history.