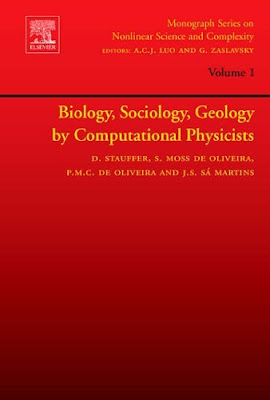 
"Physicists pretend not only to know everything, but also to know everything better. This applies in particular to computational statistical physicists like us". These are the very first two sentences of the book reviewed here. In a nutshell, the authors point the reader at their position on approaching phenomena as diverse as biological aging and speciation (chapters 3, 4), languages (chapter 5) or earthquakes (chapter 7).
What is special about Biology, Sociology, Geology by Computational Physicists? First of all the fact that the authors approach these topics without the burden of frameworks and know how, immanent to these disciplines. Thus, compared to the predominant doctrine, they exhilarate the reader with a fresh, diametrical and sometimes odd perspective.

In this respect, the authors follow their predecessor book Evolution, Money, War and Computers, where also a plethora of topics in various scientific disciplines is explored. Common to both books, statistical physics and computer simulations are creatively used to explain the most diverse phenomena. While the predecessor book had a strong bias towards biological aging, the new one treats the different subjects more equally.

Albeit, in-depth analysis of the topics discussed is not the authors intention. They rather prefer a reductionistic, sometimes a somewhat superficial way of presenting the problem under consideration, with a strong bias towards their own toy models. The KISS ("Keep it simple and stupid") principle flourishes throughout the book, which is good and bad at the same time. It is good because their computer simulations allow the reader to get a first insight into the dynamics of a model without being fed with all details. In many cases, this seems to be a good starting point for further investigations, and scientists obsessed with the idea of putting as much as possible into their computer simulations could be impressed by the results obtained already from basic models. The downside of that approach, as always with the KISS principle, is the pitfall of oversimplification.

For the social scientist, the models discussed in Chapter 6 "Social Science" could be of special interest. Here, the topics range from retirement demography, self-organization of hierarchies and opinion dynamics to traffic jams, networks, social percolation and legal physics (each with a special subsection, about 50 pages in total). Again, compactness and boldness in interpretation is a trademark of the authors style. In chapter 6.2 for example they give insights into the self-organization of social hierarchies in mere four pages. More specifically, they extend one particular model, the Bonabeau model, and courageously interpret the simulation results - a two dimensional curve - as the "transition from the more egalitarian nomadic society to agricultural life with property of land, cities and nobility" (188).

Different chapters vary in difficulty and compactness, though. Thus, even the unprepared reader will find chapters accessible to him. In general the book is aimed at those who are to some extend familiar with the disciplines discussed. Some technical terms or concepts such as "Hamming Distance" or "Diploid" should ring a bell, as they are only very briefly outlined. As long as one is not too much interested in the theories underlying the specific models, the book gives a short, but mostly entertaining view of a variety of current topics from different disciplines.

Another positive aspect of the book is the appendix chapter, which provides a rich pool of lean Fortran program listings related to the topics discussed in the different chapters. These listings shall "encourage readers to start their own simulation" as the authors point out and they are in fact quite simple to understand.

The reference section impresses as a rather complete list of papers mainly from the field of interdisciplinary physics. On a second glimpse, one realizes that the list is only of limited use because no titles of the papers are given at all (if only to give a hint about their content) and the reader has to be familar with the partially cryptic abbreviaton of the journal names from various fields.

All in all, Biology, Sociology, Geology by Computational Physicists is a book for the open minded reader and the connoisseur of interdisciplinary physics. They will, in particular, like the fresh and homourous, sometimes ironic style in which the authors comment about their own research and may obtain hints for further research. So, to quote the authors at the very end: "keep our minds open, without demanding immediate large-scale applications".
biology complexity computational modeling earthquakes sociophysics statistical physics