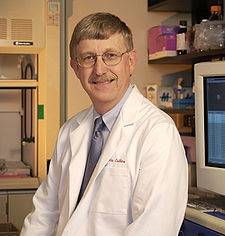 In the view of New Scientist journalist Amanda Gefter, The Discovery Institute, high priests of Creationism as an allegedly rational enterprise, aren't really worried about Richard Dawkins. Presumably he's just a great fund raising device for them. The one who really scares the BeJesus out of them is biologist Francis Collins, the evangelical Christian rumored to be Obama's choice as next Director of NIH:

The new website appears to be a response to the recent launch of the BioLogos Foundation, the brainchild of geneticist Francis Collins, former head of the Human Genome Project and rumoured Obama appointee-to-be for head of the National Institutes of Health. Along with "a team of scientists who believe in God" and some cash from the Templeton Foundation, Collins, an evangelical Christian who is also a staunch proponent of evolution, is on a crusade to convince believers that faith and science need not be at odds. He is promoting "theistic evolution" - the belief that God (the prayer-listening, proactive, personal God of Christianity) chose to create life by way of evolution. (Amanda Gefter,New Scientist)

Gefter believes the Collins alternative has forced The Discovery Institute to admit their real motive is religious, not scientific. And she may be right. She's followed this closely for some time and interviewed many of the main figures, including last year's winner of The Templeton Prize, given for "Progress toward Research or Discoveries about Spiritual Realities." In a review of a book debunking the kind of "quantum spirituality" espoused by Collins she showed herself appropriately skeptical and her take on The Discovery Institute's new tack is not a defense of Collin's brand of fuzzy thinking. She almost sounds amused:

Watching the intellectual feud between the Discovery Institute and BioLogos is a bit like watching a race in which both competitors are running full speed in the opposite direction of the finish line. It's a notable contest, but I don't see how either is going to come out the winner.

Still, Gefter makes it clear she is as concerned as the creationists about the siren chant of the Collins crowd. And the idea that Francis Collins is likely the next head of NIH sends chills down the spine of some science bloggers. But I'm not one of them. The subject came up a few nights ago during a dinner with some colleagues. These were highly accomplished senior scientists, all successful in competing for millions of dollars of NIH grants over many years (which is how we found ourselves at dinner together). Between us we knew most of the recent NIH Directors and many individual Institute directors. I doubt there was a Believer in the bunch. Yet most of us weren't deeply worried about the possibility of a Collins regime at NIH. We've all watched him for a long time and it hasn't seemed to any of us his religious views were anything but a personal peccadillo, like an enthusiasm for caving or bicycling. That's not to say we thought his religious views were benign. Promoting superstition is not something any of us thought was a virtue. But judging from past performance, what he does or promotes in his off hours isn't likely to affect NIH policy, which is a separate issue. To the extent his status as NIH Director lends credence to his religious views, this is an issue for science. But it is likely to be an even bigger issue for creationists.