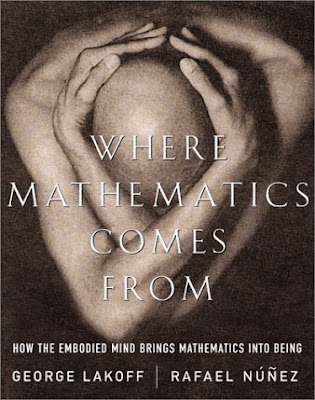 Metaphors We Live By

If Barbie thinks math class is tough, what could she possibly think about math as a class of metaphorical thought? Cognitive scientists George Lakoff and Rafael Nuñez explore that theme in great depth in Where Mathematics Comes From: How the Embodied Mind Brings Mathematics into Being. This book is not for the faint of heart or those with an aversion to heavy abstraction--Lakoff and Nuñez pull no punches in their analysis of mathematical thinking. Their basic premise, that all of mathematics is derived from the metaphors we use to maneuver in the world around us, is easy enough to grasp, but following the reasoning requires a willingness to approach complex mathematical and linguistic concepts--a combination that is sure to alienate a fair number of readers.

Those willing to brave its rigors will find Where Mathematics Comes From rewarding and profoundly thought-provoking. The heart of the book wrestles with the important concept of infinity and tries to explain how our limited experience in a seemingly finite world can lead to such a crazy idea. The authors know their math and their cognitive theory. While those who want their abstractions to reflect the real world rather than merely the insides of their skulls will have trouble reading while rolling their eyes, most readers will take to the new conception of mathematical thinking as a satisfying, if challenging, solution. --Rob Lightner

This groundbreaking exploration by linguist Lakoff (co-author, with Mark Johnson, of Metaphors We Live By) and psychologist N#$ez (co-editor of Reclaiming Cognition) brings two decades of insights from cognitive science to bear on the nature of human mathematical thought, beginning with the basic, pre-verbal ability to do simple arithmetic on quantities of four or less, and encompassing set theory, multiple forms of infinity and the demystification of more enigmatic mathematical truths. Their purpose is to begin laying the foundations for a truly scientific understanding of human mathematical thought, grounded in processes common to all human cognition. They find that four distinct but related processes metaphorically structure basic arithmetic: object collection, object construction, using a measuring stick and moving along a path. By carefully unfolding these primitive examples and then building upon them, the authors take readers on a dazzling excursion without sacrificing the rigor of their exposition. Lakoff and N#$ez directly challenge the most cherished myths about the nature of mathematical truth, offering instead a fresh, profound, empirically grounded insight into the meaning of mathematical ideas. This revolutionary account is bound to garner major attention in the scientific pressDbut it remains a very challenging read that lends itself mostly to those with a strong interest in either math or cognitive science. (Nov. 15)
Copyright 2000 Reed Business Information, Inc
methaphors science divulgation science education