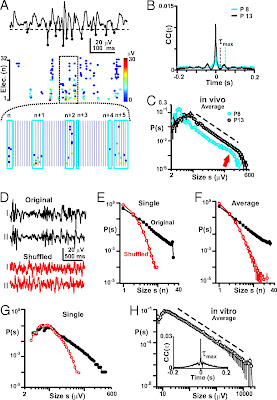 Maturation of the cerebral cortex involves the spontaneous emergence of distinct patterns of neuronal synchronization, which regulate neuronal differentiation, synapse formation, and serve as a substrate for information processing. The intrinsic activity patterns that characterize the maturation of cortical layer 2/3 are poorly understood. By using microelectrode array recordings in vivo and in vitro, we show that this development is marked by the emergence of nested θ- and β/γ-oscillations that require NMDA- and GABAA-mediated synaptic transmission. The oscillations organized as neuronal avalanches, i.e., they were synchronized across cortical sites forming diverse and millisecond-precise spatiotemporal patterns that distributed in sizes according to a power law with a slope of −1.5. The correspondence between nested oscillations and neuronal avalanches required activation of the dopamine D1 receptor. We suggest that the repetitive formation of neuronal avalanches provides an intrinsic template for the selective linking of external inputs to developing superficial layers.

A simple random-neighbor SOC model that combines properties of the Bak-Sneppen and the relaxation oscillators (slip-stick) models is introduced. The analysis in terms of branching processes is transparent and gives insight about the development of large but finite mean avalanche sizes in dissipative models. In the thermodynamic limit, the distribution of states has a simple analytical form and the mean avalanche size, as a function of the coupling parameter strength, is exactly calculable.

Juan A. Bonachela, Miguel A. Munoz

The existence of true scale-invariance in slowly driven models of self-organized criticality without a conservation law, as forest-fires or earthquake automata, is scrutinized in this paper. By using three different levels of description - (i) a simple mean field, (ii) a more detailed mean-field description in terms of a (self-organized) branching processes, and (iii) a full stochastic representation in terms of a Langevin equation-, it is shown on general grounds that non-conserving dynamics does not lead to bona fide criticality. Contrarily to conserving systems, a parameter, which we term "re-charging" rate (e.g. the tree-growth rate in forest-fire models), needs to be fine-tuned in non-conserving systems to obtain criticality. In the infinite size limit, such a fine-tuning of the loading rate is easy to achieve, as it emerges by imposing a second separation of time-scales but, for any finite size, a precise tuning is required to achieve criticality and a coherent finite-size scaling picture. Using the approaches above, we shed light on the common mechanisms by which "apparent criticality" is observed in non-conserving systems, and explain in detail (both qualitatively and quantitatively) the difference with respect to true criticality obtained in conserving systems. We propose to call this self-organized quasi-criticality (SOqC). Some of the reported results are already known and some of them are new. We hope the unified framework presented here helps to elucidate the confusing and contradictory literature in this field. In a second accompanying paper, we shall discuss the implications of the general results obtained here for models of neural avalanches in Neuroscience for which self-organized scale-invariance in the absence of conservation has been claimed.

Recent experiments on cortical neural networks have revealed the existence of well-defined avalanches of electrical activity. Such avalanches have been claimed to be generically scale-invariant -- i.e. power-law distributed -- with many exciting implications in Neuroscience. Recently, a self-organized model has been proposed by Levina, Herrmann and Geisel to justify such an empirical finding. Given that (i) neural dynamics is dissipative and (ii) there is a loading mechanism "charging" progressively the background synaptic strength, this model/dynamics is very similar in spirit to forest-fire and earthquake models, archetypical examples of non-conserving self-organization, which have been recently shown to lack true criticality. Here we show that cortical neural networks obeying (i) and (ii) are not generically critical; unless parameters are fine tuned, their dynamics is either sub- or super-critical, even if the pseudo-critical region is relatively broad. This conclusion seems to be in agreement with the most recent experimental observations. The main implication of our work is that, if future experimental research on cortical networks were to support that truly critical avalanches are the norm and not the exception, then one should look for more elaborate (adaptive/evolutionary) explanations, beyond simple self-organization, to account for this.